Design a site like this with WordPress.com
Get started
Skip to content
Date: March 24, 2019Author: hillsidekingscourt 0 Comments 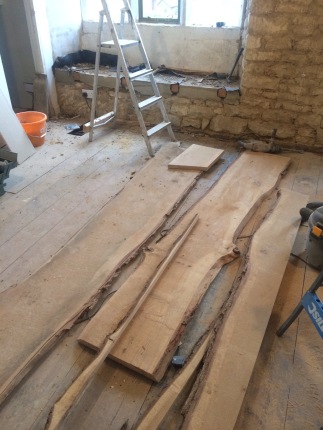 We’re getting to that stage where we think, hey, this is going to happen and it’s going to be good. This week Sam and John took a slice of an oak and turned it into a wonderful window seat in what will be our main bedroom. Another slice now looks like an original oak beam, skillfully hiding a steel beam over the window*.

Oiled, it glows a deep gold in the sun. It’s so beautiful and perfectly smooth we daren’t sit on it. But we dream of wistfully sitting on it watching the mists over Woodchester as an autumnal sun rises or the deep reds as the sun sets.

In the pictures you can see the original front stone wall of the house, some 18-inches-thick. It awaits several new coats of lime render and plaster, mixed to an ancient and secret recipe by StroudLime, due in April. The old plaster, with horse hair and grass mixed in, was in a state of disrepair and moved when you touched it. One bash with a spade and down it came in great slabs.

The new plaster will be similarly reinforced with horsehair.

Other milestones… we now have central heating and hot water courtesy of DA Cook Heating. And, apart from the loft, lights and power are on throughout the house courtesy of Sarah of Purplesparks.

* When we probed above the window we found it to be cardboard, taped and thickly painted. Above were two, reassuring steel beams holding up a thick wall of stones above. In between the beams course concrete filled the gaps. The beams, and some of the concrete, remains hidden by inch-thick oak planking, sanded and oiled.