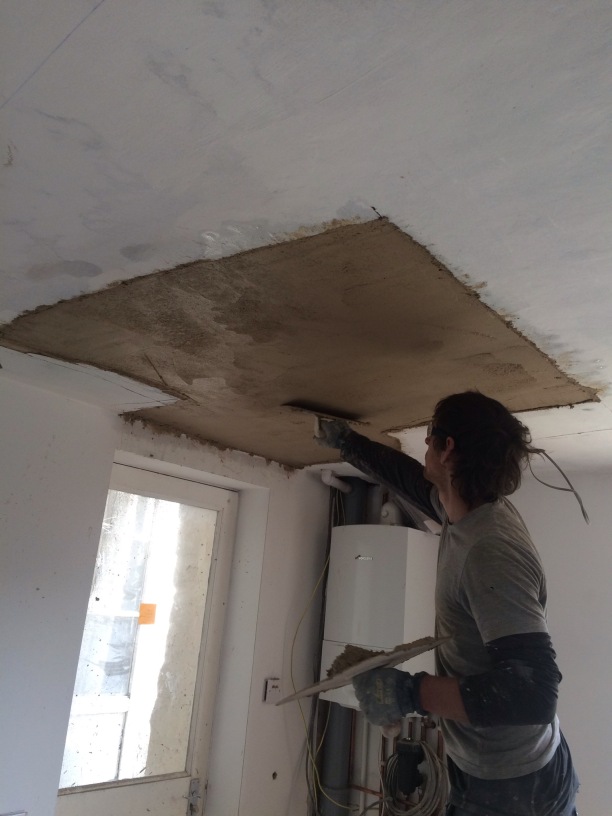 When we took down the sheet of lime plaster in what will be our main bedroom, you could pick out the horsehair. Although the wall visibly moved when you pushed it, the plaster had probably not been changed in a century or even two. Its strength and longevity came from the hair of some very old horses.

Now Stephen, Luke and Kurt from Stroud Lime have started to replace the old plaster with three coats — so far — of new lime rendering in the main bedroom and a section of the lathe and plaster ceiling in the kitchen. Mixed with hair of some young, spritely horses. It’ll soon be set for another couple of centuries.

Stephen specialises only in practicing the old art of lime plastering. He is one of very few still keeping the craft alive. He explains the value of lime plaster in not just old buildings such as 2 Hillside. Over time the layers of lime will set back to rock, returning the lime to its original state, stone. But, providing the plaster is not over-painted with a modern non-breathable paint, it will protect and allow the stones of the house and the whole cottage to breathe.

Each layer has its own recipe. And for the moment the whole wall and ceiling needs spraying with water twice daily, so that it only dries out slowly. The plaster will be very hard within three months. But it will continue to set slowly for years, even a century or more.

Once complete with two more skim coats, we will paint the wall and ceiling with a traditional clay-based paint.